D S Thakur is an Indian politician and member of the Bharatiya Janata Party (BJP). Due to his clean image, people in Dalhousie often call him BJP ka Kejriwal.

In 2017, he entered politics. BJP gave him a ticket to contest a State Assembly election from Dalhousie for BJP. During the election, people criticized the party as he is an outsider. He contested the election against Asha Kumari of the Indian National Congress (INC). But he lost the elections by a margin of 1,873 votes. During the election campaign, he targeted Asha for not working on the local problems of Dalhousie residents.

Currently, he is the BJP President of the Chamba district.

D S Thakur was born in 1966 in Kandla village which is present under the Churah constituency. His father’s name is Sh. Kirpa Singh.

Besides politics, he is also a businessman, wine contractor, and horticulturist. 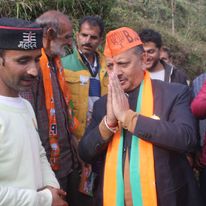 Thakur completed his Matriculation from HPBOSE Dharamshala Year in 1985. 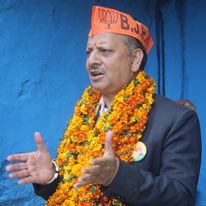 Thakur has assets of Rs 8 crore.