Ishaan Kishan has created history in the third ODI between India and Bangladesh. Ishaan Kishan has become the fastest batsman to score a double century in ODIs. Ishaan took only 126 balls to achieve this world record. He has broken the record of Universe Boss Chris Gayle. Earlier, the record of scoring the fastest 200 runs in ODI cricket was in the name of Chris Gayle. Who scored a double century in 138 balls. 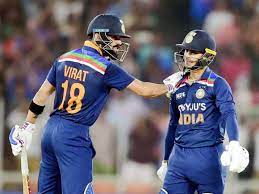 In the third and last ODI of the three-match ODI series being played in Mirpur, India elected to bat first after losing the toss. In the absence of Rohit, Ishaan came to open the innings with Dhawan. Dhawan was dismissed by Mehad Hasan Miraj in the fifth over itself. But after the first wicket, Ishaan made such a partnership with Virat Kohli. In which this big record came.

Sachin’s name is also in this list. Sachin scored 150 runs in 118 balls in his memorable innings against South Africa in the year 2010. Ishaan Kishan had played only nine ODIs for India before this match. In which he did not score any century. Talking before this innings, Ishaan had scored 239 runs with three half-centuries. But with the help of a matchless century in this innings, his ODI figures have become very impressive.

Ishaan Kishan has played such an innings against Bangladesh. Which cricket fans will remember for years. Ishaan scored 210 runs in 131 balls in this match. Ishaan hit 24 fours and 10 sixes in this innings. With this, Ishaan has joined the list of Indian legends Sachin Tendulkar, Rohit Sharma, Virender Sehwag who have scored 200 runs in ODIs.