Ángel Fabián Di María popularly known as Ángel Di María is an Argentine professional footballer. He is of Italian descent and holds Italian nationality. He is Roman Catholic. In the 2022 FIFA World Cup Final, he scored a goal against France. 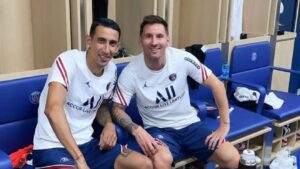 Ángel was born on 14 February 1988 in Rosario, Santa Fe, as one of three children of Miguel di Maria and Diana Hernandez to Miguel Di María and Diana Hernández. He started playing football at the age of 3.

He used to help his parents with their work at a local coal yard along with his two sisters, Vanesa, and Evelyn. Due to the low income, his family earned, purchasing football boots, and keeping up with Di María’s hobby was difficult for his parents. 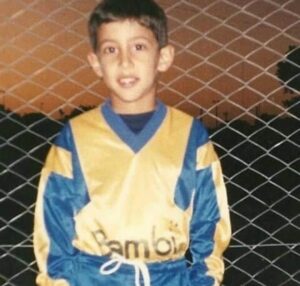 In 2011, Ángel got married to Argentine Jorgelina Cardoso. Together they have two daughters, Pia, and Mia. 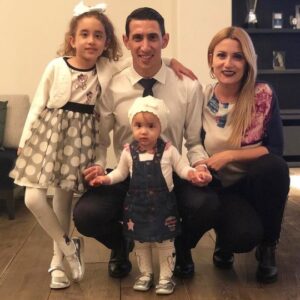 On 14th December 2005, he made his professional debut in Rosario’s final fixture of the Apertura. On 24 November 2006, he scored for the first time in the Apertura in a 4–2 win at home over Quilmes. On 27 February 2010, Di María scored his first hat trick in a classic 4–0 win against Leixões.

On 28 June 2010, Ángel was signed by Real Madrid and signed a five-year contract for €25 million, plus €11 million in incentives. On 4 August 2010, he made his debut for Real Madrid in a friendly match against Mexican side América, which Real Madrid won 3–2. On 29 August 2010, he made his league debut against Mallorca. On 18 September, Di María scored his first league goal for Real Madrid in their 1–2 away win over Real Sociedad. On 28 September, he scored his first goal in the UEFA Champions League against Auxerre in a 0–1 victory.

In the 2014 UEFA Champions League Final against Atlético Madrid on 24 May 2014, Di María dribbled past two players before producing a save from goalkeeper Thibaut Courtois. On 26 August 2014, Di María signed a five-year deal with Manchester United for a transfer fee of £59.7 million, one of the most expensive transfers of all time and the highest fee ever paid by a British club at the time.

In 2015, he signed a four-year contract for the French champions for an undisclosed fee. 30 August 2015, he made his Ligue 1 debut. On 15 September, Di María scored his first goal for PSG on his UEFA Champions League debut for the club, a 2–0 win over Malmö FF at the Parc des Princes.

On 23 September 2020, Di María was handed a four-match suspension for a spitting incident with Álvaro González during Le Classique. He made his return to league action in a match against Rennes three days later and scored a goal to help PSG win the match 3–0.

On 8 July 2022, Di María joined Juventus as a free agent after signing an annual contract. On 15th August 2022, he made his club debut, in Juventus’s opening match of the Serie A season. On 15 September, he made his 100th Champions League appearance, and his debut with Juventus in that competition, in a 2–1 home defeat against his former club Benfica. 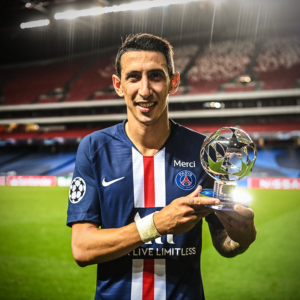 On 28 May 2015, Di María was included in Argentina’s national team for the 2015 Copa América. On 6 June, he was selected to captain the team in the absence of Lionel Messi for a warm-up match against Bolivia.’ On 22 May 2018, Di María was named to the 23-man squad by manager Jorge Sampaoli for the 2018 FIFA World Cup in Russia.

On 1 June 2022, Di María scored Argentina’s second goal in a 3–0 win over reigning European Champions Italy at Wembley Stadium in the 2022 Finalissima. On 11 November 2022, Di María was named in the final squad for the 2022 FIFA World Cup in Qatar. In the finals of the World Cup, he scored a goal against France. 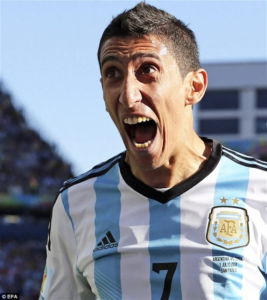 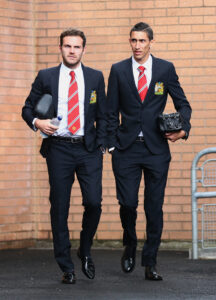 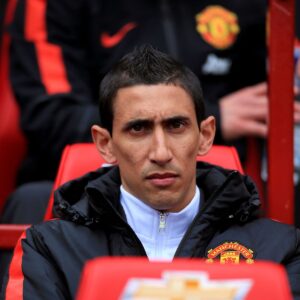 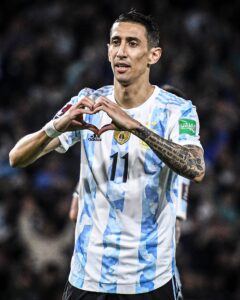