Harish Singh Rawat was born 27 April 1948 is an Indian politician who was Chief Minister of Uttarakhand from 2014 to 2017. A five-time Member of Parliament, Rawat is a leader of the Indian National Congress party. As a member of 15th Lok Sabha, Rawat served as Union Minister of Water Resources in the cabinet of Prime Minister Manmohan Singh from 2012 to 2014. 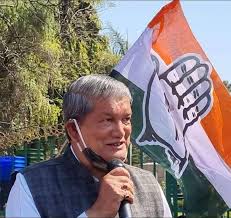 He also worked as Minister of State at the Ministry of Parliamentary Affairs, Ministry of Agriculture, Ministry of Food Processing Industries(2011–2012) and Ministry of Labour and Employment (2009–2011). 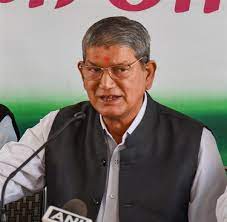 Starting at village level politics, and after staying as a trade unionist and an Indian Youth Congress member for many years, he joined the Indian Parliament in 1980 as a member of the 7th Lok Sabha by defeating the BJP veteran Murli Manohar Joshi from Almora parliamentary constituency, followed by the 8th Lok Sabha and the 9th Lok Sabha.

He has been head of Congress Volunteer Wing, Congress Seva Dal, since 1980. In 1981, he along with Subramanian Swamy and 13 others led first pilgrimage to Kailash–Manasarovar after 1962 Sino-Indian War. 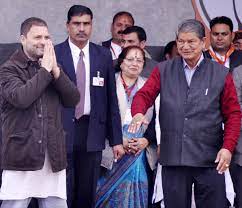 In 2000, he was unanimously elected as President of Uttarakhand Pradesh Congress Committee,[9] and remained so until he was replaced by Yashpal Arya. In 2002, he was elected as a member of the Rajya Sabha, the upper house of Indian parliament.

In the 2009 general election, he left his traditional stronghold of Almora after it became a reserved seat post delimitation to contest from Haridwar, and won the election with over 3.3 Lakh of votes.

In February 2014, Rawat took the oath of office as Chief Minister of Uttarakhand when Vijay Bahuguna resigned due to criticism of his handling of rehabilitation after June 2013 floods.In July 2014, he won a by-election from Dharchula assembly seat by over 19,000 votes. 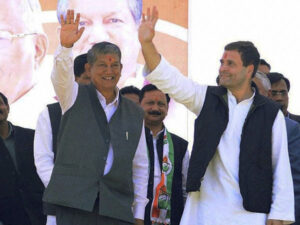 On 18 March 2016, nine Congress MLAs rebelled against Rawat, reducing the Congress-led Government to a minority. The Union Government decided to impose President’s Rule in the state, and the order was signed by President Pranab Mukherjee on 27 March 2016.

He was later reinstated as Chief Minister on 11 May 2016 after winning the trust vote. On 11 March, Congress under the leadership of Harish Rawat lost the 2017 Assembly Elections to BJP. He was also defeated from the two seats (Haridwar Rural and Kichha) from which he contested.

In Uttarakhand Political Crisis in 2016. A video has been released by a private news channel (Samachar Plus).  Which Sting video viral by samachar plus CEO Umesh Kumar. The sting video claims that Harish Rawat gave Rs 25 lakh each to 12 MLAs. The sting video allegedly shows Congress MLA Madan Singh Bisht talking about the money deal involving Harish Rawat.

Some Interesting Facts About Harish Rawat